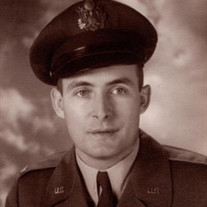 Henry Merle Eason Sr. Pooler, Georgia Henry Merle Eason Sr., 97, died on Friday, October 16, 2020. He was born in Manassas, Ga. To all who knew him from his bomber days as a pilot in what became the U.S. Air Force to those who benefited from him as a co-worker and crew leader on the railroad to his neighbors and fellow Methodist congregants and family members, Merle was the sort of man we can be proud to call a natural hero, an almost vanishing species in an age when people are so self-focused. He was an American with a capital A, a Southern gentleman with all those fine characteristics, an authentic Christian and the best father and husband anyone ever had. He was the sort of fellow who after cutting his own lawn in Savannah would then wheel his mower over to a neighbor’s lawn, who might not be as able, and give their grass a nice trim without ever mentioning the good deed. Generosity was one of his natural traits, selflessly giving to his family and friends while forgoing a fancy wardrobe or a speedboat or a shiny new car. Modesty was another of his wonderful traits, though his intellectual gifts were vibrant until the very last, as he continued his lifelong studies of everything from history to religion to fine literature. You could not be around Merle for long without noticing that your own manners could use some polish. And he had a fine twinkle in his blue eyes, especially when he laughed. He was a graduate of Reidsville (Ga.) High School, attended Atlanta Junior College (now Georgia State University) and Dickinson Seminary in Williamsport, Pa. He received civilian pilot training at Georgia Military College and the University of Tampa. Merle served during World War II and the Korean War. On August 4, 1945, he received his commission as a second lieutenant and his pilot’s wings at Turner Army Air Field, U.S. Army Air Corps, in Albany, Ga. He was stationed at Rhein-Main Air Base in Germany and was discharged with the rank of captain. Merle retired as a conductor of Seaboard Systems Railroad (now CSX Transportation). He was a lifetime member of the United Transportation Union, the Reserve Officers Association and the Disabled American Veterans. He was a member of the Sons of the Revolution and the American Legion Post 322 in Pooler, Ga. He was also a member of Garden City United Methodist Church and the Full Gospel Business Men’s Fellowship International. Merle was a descendant of a long line of ancient greats going all the way back to William the Conqueror, and came from a family that helped settle Jamestown, Virginia in 1610. He was preceded in his death by his parents, Robert E. Eason Sr. and Oka Daniel Eason, and his first wife, Shirley Fennell Eason. Survivors include his wife, Martha Susan Anderson Eason of Pooler, Ga.; son and daughter-in-law Henry Merle Eason Jr. and Ellen Bullington Eason of San Francisco, Calif.; son and daughter-in-law Robert Fennell Eason and Maureen Farrell Eason of Savannah, Ga.; daughter and son-in-law Deborah Eason Anderson and Christopher Eric Anderson of Jacksonville, Fla.; granddaughter Sterling Fennell Eason of Mount Pleasant, S.C.; grandson Robert Emmett Eason of Savannah, Ga.; great-grandson William Owen Collins of Mount Pleasant, S.C.; stepson William Stan Anderson and wife Frances Davis Anderson and their children, Amber Louise Anderson and William Luther Anderson, all of Pooler, Ga.; and stepson John Mitchum Anderson and wife Dawn Holder Anderson of Marietta, Ga., and their son, Tyler Mitchum Anderson of Marietta, Ga. A Memorial Service will be held at a later date.

Henry Merle Eason Sr. Pooler, Georgia Henry Merle Eason Sr., 97, died on Friday, October 16, 2020. He was born in Manassas, Ga. To all who knew him from his bomber days as a pilot in what became the U.S. Air Force to those who benefited from... View Obituary & Service Information

The family of Henry Mercer Eason Sr. created this Life Tributes page to make it easy to share your memories.

Send flowers to the Eason family.