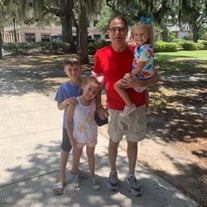 Dr. Gregory Victor Stajich, 68, of Savannah, GA passed away at his home November 21, 2020. He was born in New York, New York to the late Maks Alfred and Sibylle Altmann Stajich on September 13, 1952. He was raised in St. Petersburg, Florida. In 1972 he received an Associate degree from St. Petersburg College. He earned a Medical Technology Degree from the University of Central Florida in 1975. In 1982 he received a Bachelor degree from Mercer University School of Pharmacy and subsequently a Doctor of Pharmacy from the same institution. From 1983-2007 he was a beloved Professor of Pharmacy at Mercer University and Neonatology at Grady Memorial Hospital in Atlanta, GA specializing in oncology. In 2008 he moved to Savannah and accepted a position as Professor at South University. He was a member of the Mercer Alumni Association. Dr. Stajich published several peer reviewed articles including one in JAMA. His favorite publication was a “Reflections” piece published in the American Journal of Hospital Pharmacy in 1991 entitled “Fetal Attraction” which detailed his love for neonatology. He was known as the “rapping professor” with his popular Coumadin YouTube music video. He was twice voted Teacher of the Year at South University. Gregory was always making others laugh, in and out of the classroom, with his good humor and funny jokes. When he wasn’t working, he enjoyed walking his dog Nigel in the park, playing pickleball at the YMCA, and visiting his family. He was a loving dad instilling his love for Atlanta sports, good music, and finding great BBQ with his daughter. He truly enjoyed his second act as “Papi” the grandpa and never missed a birthday or Christmas with his grandchildren. He loved his brother, his wife, and their children deeply. He never missed a weekly phone call and dreamed of a giant family reunion. He always spoke highly of his work colleagues and never wanted to retire because he truly loved what he did. He was a true friend to so many and always had a way to make any stranger smile. He was one of a kind and will be terribly missed. He was preceded in death by his parents and a son, Jeremy Altmann Stajich. Surviving are his daughter and son in law, Allison Stajich Hennek and Kurt Hennek; grandchildren, Jackson, Blakely, and Quinn Hennek; brother, Jeffrey Stajich and sister in law Chris Firpo; nephew, Jason Stajich; niece, Kirsten Stajich Sardi. Baker McCullough Funeral Home Hubert C. Baker Chapel is assisting the family with Private Services. In lieu of flowers, contributions may be made to Dr. Gregory Stajich scholarship fund for future pharmacy students at South University.

Dr. Gregory Victor Stajich, 68, of Savannah, GA passed away at his home November 21, 2020. He was born in New York, New York to the late Maks Alfred and Sibylle Altmann Stajich on September 13, 1952. He was raised in St. Petersburg, Florida. In... View Obituary & Service Information

The family of Dr. Gregory Victor Stajich created this Life Tributes page to make it easy to share your memories.

Dr. Gregory Victor Stajich, 68, of Savannah, GA passed away at...

Send flowers to the Stajich family.