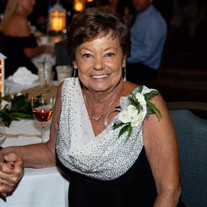 Glenda Dale O’Connell Thompson, 70, of Savannah, passed away July 29, 2021. She was born in Savannah, Georgia to the late Thomas Crowley O’Connell and Betty Jean Lanier O’Connell on August 4, 1950. She was a graduate of Savannah High School. She also met the love of her life, James Perry Thompson, in Savannah and the two were married in 1970. Glenda’s love of life and family will live on as her legacy.  To know her was to love her and to be loved by her.  Glenda knew no strangers and welcomed all to the table as she served up her famous mac and cheese. Almost every weekend, the Cookhouse was full of family and friends who would delight in the low country boil, fresh blue crabs or southern home cooking that she prepared.  Most afternoons you could find her sitting on the pool deck, overlooking the river, making plans, sharing conversation and a glass of wine with her beloved Jimmy.  She proudly served her community as a Lady Shriner Personal Aide to the Potentate and was also an active member of the Bryan Neck Historical Cemetery Association of Keller. She very much enjoyed her monthly get-togethers with The Lunch Chiks.  Most importantly, she was devoted to her family. She frequently took time to personally connect with each of her close and distant relatives. In addition to her parents, she is preceded in death by a brother, Danny O’Connell.  Surviving are her loving husband of 51 years, James Perry Thompson; daughter, Tonya Fox (Jason); son, Keith Thompson (Donna); sister, Karla Akridge; brother, Michael O’Connell; four grandchildren, Madison (Samuel), Ryland (Alyssa), Tommy (Makaila) and PJ; great grandchildren, Harper and Noah; and numerous close family and friends.  The family will receive friends Monday August 2, 2021 from 10:00am-11:30am in the funeral home chapel with funeral services to begin at 11:30am. Burial will follow at Bryan Neck Presbyterian Church Cemetery in Keller, GA. In lieu of flowers, contributions may be made to Shriner’s Hospitals for Children in Glenda Thompson’s honor to the Morris Slowden Fund in care of the Alee Shrine.

The family of Glenda Dale O'Connell Thompson created this Life Tributes page to make it easy to share your memories.

Send flowers to the Thompson family.