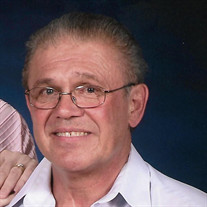 Gary William Petee, age 75, passed away Sunday, October 18, 2020 at Azalealand Nursing Home in Savannah surrounded by his family and the staff that took such amazing care of him for almost 3 years. Mr. Petee was born on September 30, 1945 in Toledo Ohio. The eldest son of the late Harold and Jane Petee, Gary was a graduate of St. Francis de Sales School in Toledo. He continued his formal education at the University of Toledo, earning a degree in Mechanical Engineering. He worked for many years in the container industry, travelling to numerous countries and learned to speak several languages. Some of the amazing places he traveled were, Russia, China, Hong Kong, Japan, Germany, Switzerland, Dubai, Scotland, France, Hungary, Sweden and Holland to name a few. He and his family moved from his birthplace of Toledo OH, to Waco TX, and then to Fayetteville GA. As his daughters grew up, he and his wife Ellen moved to Memphis TN and finally settled for retirement in Clayton GA. He retired as a Global Facilities Project Engineer with Alcoa CSI. He and his wife Ellen were parishioners of St. Helena Catholic Church in Clayton, GA where they enjoyed their retirement for approximately 13 years. Gary was very active in the church, singing in the choir, serving on the alter and as a member of the building committee that led to the beautiful parish that stands today. In his younger years, Gary was an avid hunter and loved the outdoors. He was a member of the Knights of Columbus, was in several archery clubs and enjoyed participating in Civil War reenactments. Mr. Petee was preceded in death by his daughter, Mary Elizabeth Petee. He is survived by his loving wife of 53 years, Ellen J. Riggleman Petee; daughters, Mary Anne Strickland of Locust Grove GA and Karen Rowe (Wallace) of Savannah GA; brothers, Jack Petee (Becky) of Raymond OH and Mike Petee (Chris) of Mt. Vernon OH; grandchildren, Cameron Taylor (Taylor) of Ft. Hood TX, Megan Taylor Fontana (David) of Jackson GA, Madison Strickland of Locust Grove GA and great-granddaughter, Ansley Taylor of Ft. Hood TX. A memorial visitation will be held from 2:00 – 4:00 p.m., Saturday, October 24, 2020 at Baker McCullough Funeral Home, Hodgson Memorial Chapel, 7415 Hodgson Memorial Drive, Savannah, GA 31406. A funeral mass followed by an inurnment of ashes will be held on Saturday November 7th, 2020 at 1:30 p.m. at St. Helena Catholic Church, 137 Meadow Stream Ln, Clayton, GA 30525 In lieu of flowers, remembrances may be made to the Lewy Body Dementia Association or LBDA, 912 Killian Hill Road, S.W., Lilburn, GA 30047 or online at https://www.lbda.org/donate/

Gary William Petee, age 75, passed away Sunday, October 18, 2020 at Azalealand Nursing Home in Savannah surrounded by his family and the staff that took such amazing care of him for almost 3 years. Mr. Petee was born on September 30, 1945 in... View Obituary & Service Information

The family of Gary William Petee created this Life Tributes page to make it easy to share your memories.

Send flowers to the Petee family.