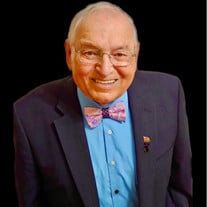 First Sgt. U.S. Army (Retired) Karl F. Walker, 86, of Savannah, GA passed away October 24, 2021 at St. Joseph's Hospital. Karl F. Walker is survived by his wife, Annelies, his daughter, Sabine, and grandchildren, Sofia and Nico. Karl was born to Friedrich and Martha Walker in Frankfurt am Main, Germany, on March 12th, 1935, the youngest of three, including his sister, Carola, and brother, Hermann, all of whom eventually followed in his footsteps to this country. Although Karl was born during a time of war, he still found happiness living on a farm in Frielingen with his family, including his beloved cousin and lifelong friend, Fritz, who is the same age and still lives in Germany with his family. Karl became a true American hero, immigrating from Germany in 1955 in search of adventure and the American Dream and to work as a cabinetmaker, a trade he learned in Germany. In 1956, the US Army had different plans for Karl and drafted him to serve and defend his new country, which led him to a 24-year military career with the United States Army Corps of Engineers, including two tours to Vietnam as a Combat Engineer where he earned a Purple Heart. At the time of his retirement as a 1st SGT in 1980, Karl received the Meritorious Service Medal, which he added to his combat medals including the Bronze Star, Air Medal and Purple Heart. Along the way, Karl changed his early cabinetmaking vocation into his avocation, building numerous pieces of furniture over the years in his beloved garage-turned woodworking shop. In 1963, Karl married the love of his life, Annelies, who has stood by his side for 58 years, including 19 moves, overseas and stateside, and who has taken the best care of him, including in the recent few years when he began having increasing health challenges. Karl and Annelies have a daughter, Sabine, and two amazing grandchildren, Sofia and Nico. Karl loved and is still so loved by his family and has a strong bond with both of his grandchildren, Nico being like the son he never had. Karl also has extended family living in Germany and the western part of the US and always maintained closeness with them despite the distance between them. Karl was a man of faith and was active and well-respected in his church, The Church of Jesus Christ of Latter Day Saints. He voluntarily served in leadership positions for many years and faithfully served those around him. We will miss is smile, his sense of humor and his tender heart. Karl has now rejoined his brother, sister, mother and father. In God’s time, we will all be reunited. Funeral services will take place Tuesday October 26, 2021 at 11am in the chapel of Baker McCullough Funeral Home Hubert C. Baker Chapel with Bishop Whitney Checketts officiating. Karl will be buried at Albert G. Horton, Jr. Memorial Veterans Cemetery in Suffolk, VA, with full military honors. Baker McCullough Funeral Home Hubert C. Baker Chapel 7415 Hodgson Memorial Drive Savannah, GA 31406 912-927-1999

Send flowers to the Walker family.