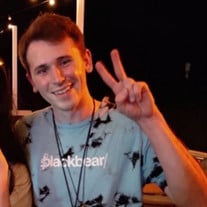 A life well lived unexpectedly ended. Dylan Tyler Green, beloved father, son, grandson, brother, nephew and friend left this earth on March 6, 2022. We are completely unprepared by this sudden loss as our hearts and our souls are heavy with his absence. Dylan, was born in Statesboro, Georgia on August 3, 1995 and resided in Savannah, Georgia. He was a 2014 graduate of Statesboro High School where he was a member of the FFA and the drama club. He loved the great outdoors and everything it has to offer including hunting, fishing and camping. So it was only natural that he joined The Boy Scouts of America, Troop 342 in 2007 and earned his Eagle Scout Award in 2013. He earned many patches, including the prestigious BSA Triple Crown Award, by going to Sea Base High Adventure Camp located in the Florida Keys in 2009 and 2013; the Northern Tier – Boundary Waters High Adventure Camp located in Minnesota in 2012; and to Philmont Scout Ranch located in Cimarron, New Mexico in 2011. While at Philmont, he served as a “Wilderness Guia”, constantly keeping an eye out for and cataloging the wildlife encountered during an eleven-day trek. He was considered a “great outdoorsman” by his fellow scout members and friends. He was an avid lover of all animals and once raised chickens for a high school project in which he received an A. Dylan was a social butterfly who never met a stranger, a foodie, a movie critic especially all Marvel movies and he was a guy who craved adventure. He enjoyed traveling and seeing new parts of the world whenever he had a chance. He inherited a great love for music from his mother. He admired all music culture and loved attending music festivals all over with friends and family. It was through music he was able to meet so many people from all walks of life which he befriended easily. Most would say he was the most kindred soul they had come across. He is preceded in death by his grandfather, Glenn Edward Green. He is survived by his daughter, Genesis, his mother and step-father, Sandra and Shawn Coulter; father and step-mother, Eddie and Margarita Green and sisters Christine, Savannah, and Charlotte; grandparents, Ron and Denise Spear; Grandmother, Debbie Green; Step-grandmother, Teresa Green; and Step-siblings, Haley Coulter, Zoey Coulter, Cody Coulter, Kristen Freeman and Katie Brandon; and an Uncle Ronnie Spear; and several Great Aunts and Uncles and cousins. A Celebration of Life will be held in Savannah, Georgia on a later date for his memorial. In the meantime his ashes will be scattered in his two favorite places Red Rocks, Colorado where he will be listening to music all the time and in Cimarron, New Mexico where he will always see the beauty of the land he loved so much. If you would like to donate to Dylan’s funeral expenses you can do so via cash-app at $scoulter76 and all flowers and cards are to be sent to Denise and Ron Spear, 616 Robbins Branch Road, Sylvania, Georgia 30467. Please sign our online guestbook at www.bakermccullough.com Services have been entrusted to Baker McCullough Funeral Home Garden City Chapel, 2794 West US Highway 80 Garden City, GA 31408. (912) 964-2862. www.bakermccullough.com

A life well lived unexpectedly ended. Dylan Tyler Green, beloved father, son, grandson, brother, nephew and friend left this earth on March 6, 2022. We are completely unprepared by this sudden loss as our hearts and our souls are heavy with... View Obituary & Service Information

The family of Dylan Tyler Green created this Life Tributes page to make it easy to share your memories.

Send flowers to the Green family.