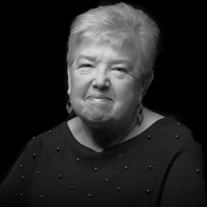 If one word described Dorothy Royann Hinely Harley, it would be the word—magnanimous. Royann was generous, forgiving and unselfish with her time and talents. She was married to Herman Lawrence “Larry” Harley on January 13, 1967. Born on October 6, 1943, in Savannah, Georgia, she was the daughter of Dorothy Louise McElveen and Roy Cleveland Hinely. She graduated from Jenkins High School in 1961. Royann worked several jobs, which included the State of Georgia Vocational Rehabilitation Agency, from which she retired after thirty-plus years of service. She was an active member of Chapel By The Sea on Tybee Island. Her parents and two sisters, Sarah Hinely Love (Donald) and Pamela Hinely Goodrum (Ashley) preceded in death. She is survived by her husband of 54 years, three sons, Ty Harley (Jennifer), Lonnie Harley (Tina), Dana Harley, and a brother, Ron Hinely. She was blessed with four grandchildren, MacKenzie, Reagan, Stone, and Madeline, along with several Aunts and Uncles, nieces, nephews, and cousins. The Harley Family would like to annouce that Saturday, November 27, 2021 the family will be receiving friends from 10:00-11:00 a.m. at Baker McCullough Funeral Home, 7415 Hodgson Memorial Drive. A memorial service will begin at 11:00 a.m. in the Hubert C. Baker Chapel. In lieu of flowers, please consider donating to the Missions Program at Chapel by the Sea Baptist Church.

If one word described Dorothy Royann Hinely Harley, it would be the word&#8212;magnanimous. Royann was generous, forgiving and unselfish with her time and talents. She was married to Herman Lawrence &#8220;Larry&#8221; Harley on January 13,... View Obituary & Service Information

The family of Dorothy Royann Hinely Harley created this Life Tributes page to make it easy to share your memories.

If one word described Dorothy Royann Hinely Harley, it would...

Send flowers to the Harley family.