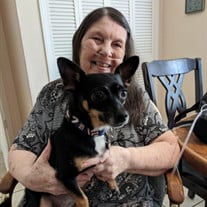 Donna Marie (Lutz) Schley slipped away peacefully to be with our Lord on November 19, 2021. She died at home under the great care of Compassus Hospice. A smoker for over 40 years, Donna had lived with Chronic Obstructive Pulmonary Disease (COPD) and the need for supplemental oxygen for nearly 15 years. She rarely missed the opportunity to tell random smokers how much they might regret their decisions later, so we will continue to carry out her mission here. She was born in Cleveland, Ohio in 1937 to Otto and Marie Lutz. Because the family moved frequently, Donna attended twelve different schools before graduating in 1955 from Lourdes Academy. Her father said they were always looking for something better for Donna and her little sister Shirley. Donna blames the frequent moves and the constant need to form new friendships for her becoming the class clown. She lived up to her nickname of “Nutsy Lutzy.” Donna began working in the office at General Tire while still in high school. Wanting to fit in with the other staff who were older than the teen, she took up cigarette smoking. Of course, at that time almost everyone, including both of her parents smoked and it was considered a normal part of life. In 1957, she married Lewis Schley and they purchased a home in Berea, Ohio. Donna was head strong about owning instead of renting. She did not want to move around like she did as a child. She worked in the Sun Finance office in Berea and in the small greenhouse business Lew had built behind his parents’ home in Strongsville. In 1968, Lew left his job with Schneider’s Greenhouse and the couple started their own greenhouse business in Congress, Ohio, outside Wooster. The wholesale and retail operation grew to be an acre under glass and about a half-acre of plastic houses. Lew was the grower. Donna was the bookkeeper. The business thrived for over 30 years before they retired to Savannah, Georgia in 2001. She was active in the pre-school ministry, marriage ministry and food service ministry at Savannah Christian, now Compassion Christian, Church. Donna did manage to kick the smoking habit in 2004, but was diagnosed with COPD in 2007. Although the disease slowed her down, it never changed her kind, selfless, caring and upbeat personality. It certainly never changed her sense of humor. She saw the best in everyone and every situation. Donna is preceded in death by her parents; sister, Shirley; husband of 61 years, Lewis; and son in law, Mitch Glicken. She is survived by her daughter Sandra Glicken and Sandra’s fiancé H. E. “Tripp” Rogers, III; grandson, Matthew Glicken; a host of nieces and nephews; and her beloved Chihuahua-Hope. A graveside service and interment will take place at 11 a.m. December 13, 2021 at Congress Cemetery, 11001 Stratton Rd. West Salem, Ohio.

Donna Marie (Lutz) Schley slipped away peacefully to be with our Lord on November 19, 2021. She died at home under the great care of Compassus Hospice. A smoker for over 40 years, Donna had lived with Chronic Obstructive Pulmonary Disease (COPD)... View Obituary & Service Information

The family of Donna Marie Schley created this Life Tributes page to make it easy to share your memories.

Donna Marie (Lutz) Schley slipped away peacefully to be with...

Send flowers to the Schley family.