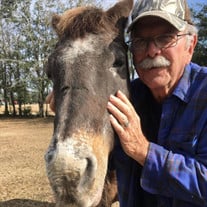 Donald “Don” Earl Wright, 78 , passed away unexpectedly, Monday, April 11, 2022 . A native of Corsicana, Texas , he was the son of Earl F. Wright and Frances Donoho Wright. Don attended Corsicana High School. He was a 14 year veteran of the United States Army, serving in Vietnam. After the military he made a career as an Auto Mechanic. He was a member of Faulkville Baptist, was an ordained deacon and loved to sing in the choir. When he wasn’t spending most of his time being Papa, he enjoyed taking numerous cruises with his wife, caring for his horse Jazz, tending to his many gardens, tinkering in his shop, and always working with cars. He also loved watching his Dallas Cowboys, Atlanta Braves, and NASCAR racing, especially the days when Dale Earnhardt was running. He was preceded in death by his mother Frances, and father Earl. Survivors include his loving wife Fran; son, Sonny; daughter, Donna Chu (Tommy); brothers, James (Debbie), Charles, and Richard(Pat); all of Texas; brothers-in-law, Sig Gorman (Sandra), Dr. Greg Gorman (Nancy); grandchildren, Brandon (Alayna), Victoria (Matthew), Turner, Jillian, and Cooper; as well as three great-grandchildren, Grey, River, and Harrison. Also surviving are numerous nieces and nephews. A funeral service will be held at 11:30 a.m., Saturday, April 16, 2022 at Baker McCullough Funeral Home, Hubert C. Baker Chapel, 7415 Hodgson Memorial Drive, Savannah, GA 31406. The family will be receiving friends from 10:30 a.m. until the time of the service. In lieu of flowers, please consider donating in Donald's name to the American Parkinson Disease Association. https://www.apdaparkinson.org/1907d3l/

The family of Donald "Don" Earl Wright created this Life Tributes page to make it easy to share your memories.

Send flowers to the Wright family.