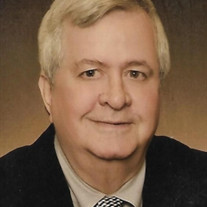 Donald Thomson Golden, Sr., 74, passed away Sunday, July 11, 2021, at home after an extended illness. Don was born in Savannah, GA, on August 9, 1946. He was the youngest son of Frank and Carolyn Golden. Don was a graduate of St Michael’s School, Savannah High School, and Armstrong State University. He was of Catholic faith. Don was a longtime realtor and broker in Savannah. He owned and operated Golden Properties formerly Coldwell Banker Garvin Realty. He was a member and Treasurer of the Optimist Club. He was a very active part of the Savannah Board of Realtors. He was also a member of several other Savannah based organizations including: Young Council of Realtors, Knights of Columbus, RPAC, & many more. Don was the recipient of many awards and achievements during the course of his career including “Realtor of the Year” in 2012. Don was predeceased by his parents and his brother, Robert F Golden. He is survived by his wife of 55 years, Susan Roberts Golden; two sons, Donald T Golden, Jr. (Donny) of Savannah and Scott Golden (Veronica) of Atlanta, GA; two grandchildren Kayleigh Golden and Peyton Golden of Atlanta; His brother Hugh Golden of New Orleans, LA; Sister-in-love Sharon Roberts Mitchell (Gary) of Savannah and many beloved nieces and nephews. A funeral service will be held at 11:00 a.m., Friday, July 16, 2021 at Baker McCullough Funeral Home, Hubert C. Baker Chapel, 7415 Hodgson Memorial Drive, Savannah, GA 31406. The family will be receiving friends from 10:00 a.m. until the time of the service at the funeral home. Burial will follow the funeral service at Hillcrest Abbey Memorial Park. The family requests in lieu of flowers that donations be given to Young Men of Honor, 2245 Vicksburg Drive, Savannah, GA 31404, c/o Diane Jackson; Hospice Savannah, Inc., P.O. Box 13190, Savannah, GA 31416; Grace United Methodist Church, 6412 Waters Avenue, Savannah, GA 31406, or Safe Shelter, P.O. Box 61119, Savannah, GA 31420.

The family of Donald Thomson Golden, Sr. created this Life Tributes page to make it easy to share your memories.