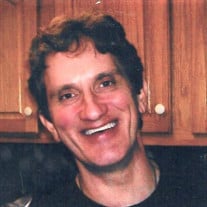 Donald "Don" Ray Newman Jr, storyteller and Savannah local, returned to his heavenly home on March 24,2022, after a valiant battle with a life long illness. Don's dedication to his family and his firm belief in God's perfect divine order supported him in his struggle and ultimately gave him peace. Don was born to Elise Lariscy and Donald Ray Newman Sr on August 19,1959 in Savannah, GA. After graduating high school Don continued his love of learning at Armstrong University, earning himself a Bachelor of Arts Degree in English and a Masters in adult education. Don celebrated a clean and sober life of recovery for 29 years. He dedicated his life to advocating for mental health and addiction treatment, mentoring others and saving countless lives. Don was an educator at heart. He was kind and energetic and always had time to answer a question or help solve a problem. His love of education went hand in hand with his love of history and writing. Don loved the city he called home. He had a way of immersing you in Savannah's history by telling colorful stories of the bygone days of Savannah. This was one of the driving forces behind the days he spent working as a tour guide for Old Town Trolley Tours and the Sorrel Weed House. Tourists and locals alike were greeted with a warm "Hey Y'all!" and by the time the tour was over every one of them left feeling like they had spent the day with an old friend. Don truly gave meaning to Savannah's nickname "the hostess city." His love for Savannah also extended into his literary career. Don published a poetry book titled: The Little Poetry Book of Savannah. The poetry in his book focused on the world renowned historical city he called home. Through this book he encourages us all to make the most of our lives and embrace creativity, inspiring others to never give up on their dreams. Don was a gifted author. Writing, to Don, was an act of faith and labor of love. He believed and saw people who were invisible to others and was faithful to telling half formed stories. Don knew that the goal wasn't to live forever but to create something that would. Through his works Don created something that would live in hearts and minds for generations to come. There was only one thing that Don loved more than academics, his family. Don could often be found with his sisters. You could always find them planning their next adventure; rather it be an Eagles concert, watching the Saint Patrick's Day Parade, or just simply enjoying each other's company. Those three were thick as thieves. Don openly expressed his love for his mother any chance he got, calling her the "sweetest mama in the world". He often expressed his thankfulness for her sacrificing so much for him. He knew that without her he would not have become the man he was. He accomplished many things in his life but his greatest accomplishment was his children. Don taught his children three important things: the confidence to always know their self-worth, strength to follow their dreams, and the ability to know how truly and deeply he loved them. Don shone his brightest in the presence of his grandchildren. He left a legacy that will live on through them. He married the love of his life, Liz, on August 12, 2010. Don loved a good romance story. He thought that every love story was beautiful, but his and Liz's was his favorite. He loved Liz with his whole being, unconditionally. He chose Liz to be his wife, to do life with hand in hand and side by side. In turn Liz dedicated her time to caring for and loving Don. She was proud to be his wife. He meant everything to her. His laughter and joy will remain with her the rest of her life. Don will be sorely missed by everyone who knew him. They say that grief is the price of love, if that is the case it has been worth every dime. Don is survived by his wife of 12 years, Elizabeth "Liz"; His Children, Kendra Ephrem (George) of Ohio, Donald Newman lll, Kenneth Taylor (Amy) of Michigan, Scott Pridgen (Reannon); his Mother, Elise Ellis (William); Sisters Lisa Aegan (Kenny) and Susan Williams (Charles), nine deeply loved Grandchildren; four adored Fur-babies; and countless other family and friends. He is preceded in death by his father Donald Ray Newman Sr His wife has asked that in lieu of flowers donations be made in Don's name to The Children's Healthcare of Atlanta- Egleston Hospital, to help provide aid in research for newborns with congenital heart defects such as Don's. Services will be held at Baker McCullough Funeral Home- Garden city on Sunday, March 27,2022. The viewing will start at 2:00pm followed by services at 4:00pm.

The family of Donald "Don" Ray Newman Jr. created this Life Tributes page to make it easy to share your memories.

Send flowers to the Newman family.