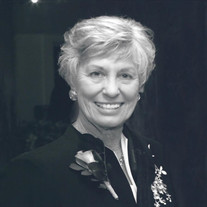 Dolly “Naomi” Turner Titcomb passed away peacefully at Sunabella memory care facility surrounded by the love of her family after a long battle with Alzheimer’s. She was the daughter of the late Ruby Sparks Turner and Harris Wesley Turner. Born July 15, 1937, in Portal, GA, her family moved to Savannah when she was a child and she lived her entire life in the city she loved. She graduated from Commercial High School, Class of 1956, with the “best-looking” accolade. In 1967, she married Earl Franklin Titcomb, Jr, who she met while they both worked at the U.S. Army Corps of Engineers. Dolly was a secretary at the Corps for many years off and on until the 1980’s when she retired. Together Earl and Dolly shared over 54 years together. Dolly was a charter member of her beloved St. Luke United Methodist Church, Whitfield Ave, founded over 50 years ago. She held various and numerous positions at St. Luke throughout the years including youth director, leaving a lasting impact on many lives. Dolly was faithful to St. Luke rarely straying far until she could no longer attend. Her passion was tennis which she learned to play in her late 50’s. Dolly joined the women’s Savannah Tennis League, playing and practicing with her friends five days a week for the next 10 years or so until stopped by a permanent injury. Dolly’s second home was in Fernandina Beach, FL where her husband’s family lives. Fernandina was her Happy Place and she and Earl loved nothing better than their trips to the beach house. She was the best and most dedicated grandmother in the world, and frequently told friends that her two grandsons, Joseph and Turner, were “her heart”. She is survived by her husband, her son, Mark Gregory Williamson of Richmond Hill, her daughter Jennifer Titcomb Smith of Savannah, as well as her two precious grandsons, Joseph Rayner Edwards and Franklin Turner Smith. She is also survived by her sister, Lawana Walker (Terry) of Lebanon, TN, and beloved niece Brenda Bland Futch (Roger) of Jacksonville, nephew Dexter Bland, and great nephews, Wesley and Jared Futch. A family graveside service will be held at the Bosque Bello cemetery in Fernandina Beach, FL, on Monday, March 28th at 3 pm. Remembrances to the Alzheimer’s Association.

Dolly &#8220;Naomi&#8221; Turner Titcomb passed away peacefully at Sunabella memory care facility surrounded by the love of her family after a long battle with Alzheimer&#8217;s. She was the daughter of the late Ruby Sparks Turner and Harris... View Obituary & Service Information

The family of Dolly "Naomi" Turner Titcomb created this Life Tributes page to make it easy to share your memories.

Send flowers to the Titcomb family.