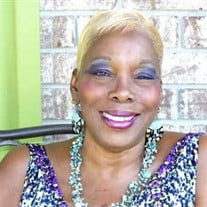 DeLores Ann Wilder was born on September 1, 1947 in West Palm Beach, Fl. Affectionately known as DeLores, Dee, Auntie Lois ,Grandma, Gigi and mama, she was the second youngest of seven children born to Corine Williams and Herman Wilder, Sr. She was predeceased by brothers Johnny Wilder, Paul Edward Wilder, Herman Wilder and her sister Geraldine White. She is survived by siblings, Jeanette Farrell and Stafford Wilder, both of West Palm Beach, Fl. She attended John F. Kennedy High School, class of 1965 and received her AA degree from Palm Beach Atlantic College. She was a mother to three beautiful children, Raymond Gordon, Sabrina Gordon Phipps and Pier Porter whom she raised in West Palm Beach. In 1975 she joined the Gospel Hall of Fame and Tabernacle Gospel Chorus where she met her soul mate and life long partner, Henry Brown. On March 27th, 1976 the two got married and together they raised a family of five.Her legacy lives on as the grandmother of 14 children and great grandmother of 8 whom she loved so much that she moved to Macon, Georgia in 2007, after retirement, to be closer. She later moved to Savannah, Georgia, the birth place of her mother and where she took her last breaths at Memorial Hospital with her husband of 46 years and children by her side, Sunday, June 12th at 9:30AM. DeLores Brown was a nurturing mother, a protective grandmother, a loving wife, a loyal friend and a vibrant soul. She was the life of every party and her laugh was infectious. Her smile could light up any room and she was an amazing story-teller. If you were ever graced by her presence, you know that she was truly unforgettable and most importantly she was a woman of extreme faith. DeLores Brown was accepting and accepted, loving and loved, imperfect but important, repentant and worthy. She was flawed yet forgiven and highly favored. She will be truly missed. Rest well.

The family of Delores Ann Brown created this Life Tributes page to make it easy to share your memories.

Send flowers to the Brown family.