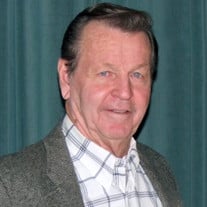 Delmar C. “Del” Reynolds, age 90, passed away Tuesday, March 23, 2021. Del Reynolds was born on April 14, 1930 in Savannah, the son of the late Charles Victor and Agnes Otto Reynolds. He was an electrical contractor and owner of Electrical Systems Company of Savannah for 43 years until retiring. He was a member of The Sycamore Church and volunteered with the Savannah Baptist Center, assisting with bus transportation and teaching Sunday School. He was also a longtime member and deacon at The Cresthill Baptist Church. He enjoyed being on the river, shrimping and crabbing; coaching baseball and softball; and was excellent with a pool cue, enjoying many years of shooting pool. He loved Beverly, his one and only, for a lifetime. He was a great Dad, but his grandchildren and great-grandchildren had his heart. His name to all of them was “Pop.” He became a follower of Jesus at the age of 35 and his life was never the same. He was a real man – nothing fake or phony. He leaves a hole in our hearts. He was preceded in death by his loving wife of 60 years, Beverly Reynolds; son, William David Reynolds; brother, Charles V. Reynolds, Jr.; and sister, Helen Moshenrose. He is survived by his sons, Dusty Reynolds (Audrey) and Vic Reynolds (Leann); grandchildren, Brandon (Jamie), Megan (Craig), Rachel, and Logan (Hope); and great-grandchildren, Findlay and Rory. A funeral service will be held at 2:00 p.m., Sunday, March 28, 2021 at Baker McCullough Funeral Home, Hubert C. Baker Chapel, 7415 Hodgson Memorial Drive, Savannah, GA 31406. The family will be receiving friends from 1:00 p.m. until the time of the service. The service will be live streamed by using the following link just before the time of the service. Burial will follow the funeral service at the Greenwich Section of Bonaventure Cemetery. In lieu of flowers, remembrances may be made to The Sycamore Church, 2031 Grove Point Road, Savannah, GA 31419.

The family of Delmar C. "Del" Reynolds created this Life Tributes page to make it easy to share your memories.

Send flowers to the Reynolds family.