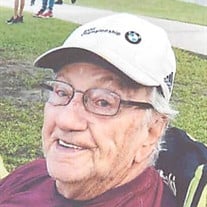 Daniel “Dan” Patrick Unser Sr., age 89, passed away peacefully Friday, May 6, 2022. Dan was born April 17,1933 in Albany, New York to the parents of Edward and Caroline Unser. He joined the United States Air Force after graduating high school and was stationed at Hunter Army Airfield. Shortly after moving to Georgia, Dan and a few of his buddies decided to go explore Savannah. Walking down Broughton Street his eyes caught hold of the most beautiful women he had ever seen and his life changed forever that night. He fell in love and married Ms. Marian Louise Waters. Together they raised four wonderful children together and he did what it took to keep his wife in her hometown. He retired from the USAF after 20 years of service on a Friday, and when the weekend was over, The following Monday morning he started his second career as the Director of Purchasing at Candler Hospital where he worked for another 20 years. However, Dan's favorite job in life was being a Papa. He never missed a game or dance recital for his grandchildren and great grandchildren. He always showed up. He coached baseball for many years and was still referred to as “coach” to many. He enjoyed playing Happy Birthday on the accordion for birthdays, and even the harmonica. Dan was a giver. He loved giving presents and was always preparing what to get everyone for the upcoming holidays. Dan was an avid Atlanta Braves and Georgia Bulldogs fan. He wanted to like the Atlanta Falcons, however that relationship never worked out. Dan was an antiquer. His favorite find was his 1988 white BMW convertible that he purchased at an auction in 2005. At 89 years old you could still see Dan driving his BMW with his roof down on the highway. Dan is preceded in death by his parents, his beloved wife of 46 years Marian, his daughter, Deborah Lamb; and his son in law, Macky Kendrick. Dan is survived by his three children, Caroline Kendrick, Candy Craft (Bennett), Daniel “Danny” Patrick Unser Jr. (Ruthie); 9 grandchildren; 14 great grandchildren; son in law, Don Lamb; special friend, Peggy Hudson; his dog, Nikki; and his family in New York. A visitation will be held Tuesday, May 10, 2022 from 12:00 p.m. to 1:00 p.m. at Baker McCullough Funeral Home, 7415 Hodgson Memorial Drive, Savannah, Georgia 31406. A Funeral Service will be held at 1:00 p.m. directly after visitation. A burial will follow at Bonaventure Cemetery, 330 Bonaventure Road, Thunderbolt, Georgia 31404.

The family of Daniel Patrick Unser, Sr. created this Life Tributes page to make it easy to share your memories.

Send flowers to the Unser family.