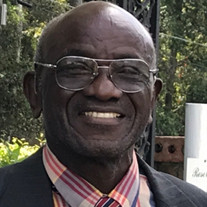 Biography of Daniel Narh Martey Thess 4:13-14. "Brothers and sisters, we do not want you to be uninformed about those who sleep in death, so that you do not grieve like the rest of mankind, who have no hope. For we believe that Jesus died and rose again, and so we believe that God will bring with Jesus those who have fallen asleep in him”. Daniel Narh Martey was born on July 17, 1947 about (73) years ago at Kwasi Nyarko near Adeiso in the Eastern region of Ghana to the late Christian Narh Martey and the late Adjoyoo Angmornor of New Ningo in the Greater Accra Region of Ghana. His grand father was Marteytsu popular known as DAHAMA of Asere Amaganyah Clan of New Ningo in Ghana. He was born into a very large extended family, but his maternal siblings were nine including twins (9). Seven boys and two girls. He was the 4th child of her mother. He left behind 4 Siblings who are mourning with the DAHAMA and the entire ASERE Family of New Ningo in Ghana. The Lord, blessed him with 9 children, six boys and three girls: - Dennis, Naomi, Esther, Diana, Patrick, Eugene, Ebenezer, Jordan & Paul. His grand children are 14 and 1 Great grand child. He was an alumnus of Adeiso Presbyterian Middle School, O’Reilly Senior High School, and Regional Maritime University, all in Ghana West Africa. Abilene Christian University in Abilene, Texas and Liberty University in Lynchburg, Virginia. He worked with a marine vessel called Ocean Fisheries and held a position as a first Engineer. He established his own auto firm called 24 hour Auto shop that he was the Managing Director in Savannah, Georgia. He was a Deacon of Little Bryan Baptist Church in Savannah, Georgia. He retired from active work in 2016. He became ill some months ago but he received his divine healing later. On the 9th day of February 2021, he was admitted in Emory Johns Creek Hospital in Atlanta. He got the entire medical assistance he needed but he was called to Glory on February 19, 2021. We do believe that because he got converted to be a child of God, we and other SAINTS shall meet and walk with him on the streets of Gold in Heaven. On behalf of the DAHAMA FAMILY I say, MY BELOVED BROTHER- AJEWU I MISS YOU. Rest in Peace. Yawor Saminya! AMEN. Visitation: 6:00 p.m. - 8:00 p.m. Friday, February 26, 2021 at the Funeral Home. Graveside Service: 9:30 a.m. Saturday, February 27, 2021 at Greenwich Cemetery. Repass at Little Bryan Baptist Church at 4110 Heard St, Savannah, GA From 11:00 a.m. to 1:00 p.m. Please sign our online guestbook at www.bakermccullough.com Services have been entrusted to Baker McCullough Funeral Home Garden City Chapel, 2794 West US Highway 80 Garden City, GA 31408. (912)964-2862. www.bakermccullough.com

Biography of Daniel Narh Martey Thess 4:13-14. "Brothers and sisters, we do not want you to be uninformed about those who sleep in death, so that you do not grieve like the rest of mankind, who have no hope. For we believe that Jesus died and... View Obituary & Service Information

The family of Daniel Narh Martey created this Life Tributes page to make it easy to share your memories.

Send flowers to the Martey family.