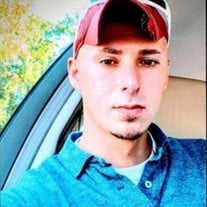 Cody Albert Laflamme, age 28, of Berlin, New Hampshire died unexpectedly on September 7, 2021 in Savannah, Georgia. Cody's loss was completely unexpected and his family is shocked and deeply saddened. Cody was born on November 27, 1992. Cody was predeceased by his maternal grandfather, Elwood (Al) Searl, his paternal grandfather, Norman (Tiri) Laflamme, and his maternal aunt, Laura (Arsenault) Hawkins. He is survived by his mother, Ann Arsenault of Berlin, New Hampshire and his father, Steve Laflamme of Milan, New Hampshire. He is also survived by his sister, Amanda Laflamme; two nephews, Carter and Kol, and brothers, Ryan Laflamme and Brady Laflamme, all of Berlin, New Hampshire. Cody is also survived by his maternal grandmother, Jeanette Searl of Chichester, New Hampshire and his paternal grandmother Irene Laflamme of Littleton, New Hampshire as well as several aunts, uncles and cousins. Cody was a 2011 graduate of Berlin High School. After graduating he attended Berlin New Hampshire Technical College for welding and graduated in 2013. He was passionate about the outdoors, hunting, fishing, 4-wheeling, and spending time with friends and family. After Cody's accomplishments in New Hampshire he moved south to Savannah, Georgia with his girlfriend of 3 years, Summer Murray. Anyone who knew Cody knew that he loved fearlessly, that he was kind, patient and was loved endlessly by his family. Cody's family and close friends will miss him more than words can say. May you rest in peace, Cody Albert Laflamme. No services will be held at this time upon the request of his parents.

The family of Cody Albert Laflamme created this Life Tributes page to make it easy to share your memories.

Send flowers to the Laflamme family.