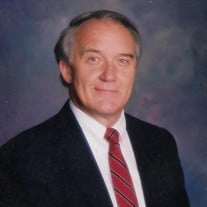 Charles O. Spann, Jr., also known as Charlie, passed away peacefully on Saturday, September 19, 2020. He was born in Hazelhurst, GA on November 3, 1944. He graduated from Jeff Davis High School, and later attended both Brewton Parker College and Armstrong Atlantic State University, eventually earning a masters and doctorate degree in education. His lifelong dedication to being an educator began as a teacher at Hinesville Middle School where he later became the Assistant Principal. It was there that his true calling as an administrator began. Many will know Charlie as the former headmaster of Memorial Day School, and Pinewood Christian Academy, and as principal of Richmond Hill High School, a role that he honored and cherished. Charlie devoted his time to many local organizations and clubs including the Southeastern Association of Independent Schools, Chatham Independent School Association, Savannah Exchange Club, and various others. He was a dedicated member of Memorial Baptist Church and cherished his role as a youth leader and adult Sunday School teacher. Along with his commitments to his faith and community, he was a devoted grandfather to his grandsons, Michael and Nolan. He was an avid reader, enjoyed fishing at his cabin on the river and time spent with his wife and family. He is survived by his devoted wife, Linda; daughters, Tracy Spann and Gina Spann McNamara; son-in-law, Michael C. McNamara; grandsons, Michael C. McNamara, Jr. and Nolan P. McNamara; sisters, Rebecca Spann Yarbrough and Sue Spann McConnell; brothers, Herb Ellis and Joe Ellis and many nieces, nephews and cousins. The visitation will be Friday, September 25, 2020 from 5pm - 7pm at Baker McCullough Funeral Home-Hodgson Memorial Drive. The funeral will be Saturday, September 26, 2020 at 11:00am at the Memorial Day School sanctuary (formerly Memorial Baptist Church)-Habersham Street with burial to follow at Forest Lawn Memory Gardens. Flowers are accepted or remembrances can be made to the American Heart Association.

The family of Charles O. Spann, Jr. created this Life Tributes page to make it easy to share your memories.

Send flowers to the Spann family.