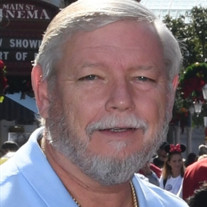 Charles Allen Fitzpatrick, Jr., passed away Wednesday, June 15, 2022, unexpectedly, while enjoying one of his favorite past time hobbies. He was born in Morehead City, North Carolina, January 25, 1955. After graduating from Johnson County High School, Mountain City, Tennessee, he married his high school sweetheart, Melanie Hoover Fitzpatrick, September 7, 1974. Charlie enlisted in the United States Army on November 21, 1974, as a Control Accounting Specialist. In 1985 he graduated flight school earning his “Wings” as a Huey Pilot, as a W1. Eight weeks later he transitioned to a UH-60 Blackhawk Pilot. While on Temporary Duty with the United State Drug Enforcement Agency in the Bahama Islands, he was involved with the interdiction and confiscation of one of the largest drug seizures of 1989. Retired CW3 Charles Allen Fitzpatrick, Jr. “Chuck” served his Country in many military operations. He flew over 250 hours on logistic missions without any accidents or incidents in support of Operation Desert Shield/Desert Storm in 1991, which included transporting General Schwarzkopf’s security detail team to the Safwon Peace Talks. Chuck completed several rotations in support of Operation Provide Comfort flying over 150 hours on varied missions from food drops to Kurdish refugees stranded in snow covered mountains, to monitoring Iraqi troop movement ensuring compliance with the U.N. Peace Treaty. He certified as the only U.S. Military forward area refuel point (FARP) in Iraq and inspected it to ensure refuel operations could be conducted without accident or incident. He also served in the Bagdad and Kuwait conflicts. During his time of active duty he earned many accommodations and awards; 3 Bronze Stars, Meritorious Service Medal, Air Medal, Army Commendation Medal, Army Achievement Medal, Joint Meritorious Unit Award, Army Superior Unit Award, 2 Army Good Conduct Medals, a National Defense Service Medal, Southwest Asia Service Medal, Humanitarian Service Medal, Armed Fores Reserve Medal, Non-commissioned Officer’s Professional Development Ribbon, Army Service Ribbon, Overseas Service Ribbon, Kuwait Liberation Medal, Marksman Badge, and an Army Senior Aviator Badge. After retiring from the US Army on March 31, 1996, from Hunter Army Airfield, Savannah, Georgia, Charlie had a variety of “civilian” jobs with JC Lewis Ford, Home Depot and the US Postal Service. Realizing that his life’s passion was proudly serving his Country and supporting the Soldiers of the United States Army, he began his US Federal Government career with the 3 rd Infantry Division at Ft.Stewart, Georgia, as a Safety Specialist-GS-11 in 1998. Chuck continued to deploy and support the United States Soldiers throughout his civil service in Afghanistan, Kuwait, Iraq, and Bosnia-Herzegovina. He earned the Army’s Civilian Superior Service Award while on a six-month deployment to Bosnia in support of the US Peace-Keeping Mission from 1999-2000. In 2005 Chuck became the 3 rd ID Missions Safety Director. He was also, awarded the Commander’s Award for Civilian Service for Meritorious Service as the 3 rd Infantry Division Safety Director GS-14 during time of hostilities in support of Operation Iraqi Freedom January-December 2005. After many years of deployments with the 3 rd ID, Chuck retired from that position in April 2017. Charles Allen Fitzpatrick, Jr., is survived by his wife of 47 years, Melanie Hoover Fitzpatrick. His daughter, Angela Fitzpatrick Billingsley, his son-in-law Beau Michael Billingsley, and his oldest granddaughter “CG” Charlee-Grace Fitzpatrick. His daughter, Laura Fitzpatrick Schlomer, his son-in-law, Wes Joseph Schlomer, his youngest granddaughter, “Miss Emma” Emma Jane Schlomer. His sister, Cindy Fitzpatrick, nieces, Jennifer Garcia (Jose), Megan Bass Trejos (Kenneth), and his nephew Matthew Bass (Angel). His great-nieces and great-nephews; Mia Trejos, Julian Trejos, Josiah Garcia, Logan Bass, and Preston Bass of Beaufort, North Carolina. His mother, Rachel Pennuell Fitzpatrick of Morehead City, North Carolina. His niece Becky Hoover Cretsinger (Shane) and great-nephew Sam Cretsinger of Shady Valley, Tennessee. His sister-in-law Norma Hoover McCullen (her husband Jon) of Abbeville, Mississippi, and many aunts, uncles, cousins, and friends that he loved dearly. Charlie was predeceased by his daddy, Charles Allen Fitzpatrick, Sr., his mother-in-law, Martha Hoover, his father-in-law Walt Hoover, and his brother-in-law, Ted Hoover. Charlie was always willing to lend a helping hand, the first to volunteer, he was determined, passionate, told great dad jokes, provided hugs of comfort, long words of wisdom, he was honorable, a devoted husband, father, and Papa. He was loyal to his friends and family, had a great sense of humor, passing down stories of family, and absolutely loved playing with his granddaughters. He will always be remembered for his love for God, Family, and his Country. In the words of Charles Allen Fitzpatrick, Jr., “I think I’d like to be remembered as a Man that loved his Family, his County, and would be willing to place his life on the line to defend either of them. I’d like to be remembered as the Man that never gave up on anything or anyone, and when he sees something wrong, he’d try to fix it. I’d like to be remembered as a Man with high morals and integrity. I hope I’m remembered as a Man that followed his heart and God, and often helped those in need. But most of all, I hope that I’m remember by my family, as a Father who loved them unconditionally. Be good, stay sweet, and make good decisions.” A Graveside service will be held on Wednesday, June 22, 2022, at 10:00 a.m. in the Greenwich Cemetery, 330 Bonaventure Road, Savannah, Georgia 31404 with Andrew Fountain officiating. In lieu of purchasing flowers, Mr. Charles Fitzpatrick and his family would appreciate a donation made to the University of Florida Health Proton Therapy Institute. The UF Health Proton Therapy Institute in a non-profit radiation oncology facility caring for patients undergoing treatment for cancer. The organization has treated thousands of patients from around the world and continue to provide cutting edge cancer treatments. Donations can be made via check or website. Checks : Make payable to the UF Health Proton Therapy Institute Send to: 2015 North Jefferson St Jacksonville, FL 32206 Attn: Brad Robbert or Development Website: https://giving.ufhealth.org/events-campaigns/proton/ Please click on either "give now" or select one of the four primary fundraising campaigns. Enter Charles Fitzpatrick in the "Memorial/Honorary" section of the donation.

The family of Charles Allen Fitzpatrick, Jr. created this Life Tributes page to make it easy to share your memories.

Send flowers to the Fitzpatrick family.