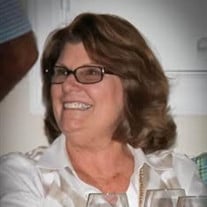 Betty Catherine Anderson VanWechel (Cathie), 74 of Garden City, GA went to be with our Lord and Savior on Saturday, January 23, 2021. Cathie was born on May 21, 1946 in Savannah, GA. She married Stephen A. VanWechel of Seattle, WA on August 22, 1967. She was a kindergarten teacher at Woodlawn Baptist Church from 1970 to 1986. She was a beloved teacher who is remembered fondly by so many. Cathie was also involved in the Garden City recreation department for many years and taught hundreds to swim. In 1986 she became the owner/operator of Mack’s 5 & 10 which was started by family in 1946. Cathie retired in 2010 and loved spending time on Tybee Island and vacationing with her family. Cathie was a member of First Baptist Church of Garden City for most of her life. She loved her church and the people in it. She served in many areas such as working in the library, helping in the kitchen during Vacation Bible School, and chaperoning the youth. But what she loved the most was teaching Children’s Church alongside Sue Walea. Cathie was preceded in death by her parents Wallace and Betty Anderson, her Aunts Gene Baker, Edith Youmans, and her Uncle Harry Anderson. She is survived by her husband Stephen VanWechel, her children Leigh Hinson (Al), Mark VanWechel (Kim), grandchildren Nicholas Stephen Trist, Skylar VanWechel, EllaKate and Campbell Hinson, her brother Wallace Roy Anderson (Paige), nieces Kendi Rainwater (Nate), Katie Bargoil Nakagawa (Masato), nephews Roy Anderson (Haley), Cameron Anderson (Gina) and several great nieces and nephews. Visitation will be held Wednesday, January 27, 2021 at 11 a.m. followed by a service beginning at 12 p.m. at First Baptist Church of Garden City, 35 Nelson Avenue Garden City, GA 31408. Social distancing will be in place and the service will be streamed on the church's facebook page. In lieu of flowers, memorial contributions can be made to the First Baptist Church of Garden City's library fund or to The Thomaston Hospice Foundation at 512 South Center Street, Thomaston, GA 30286. Please sign our online guestbook at www.bakermccullough.com Services have been entrusted to Baker McCullough Funeral Home Garden City Chapel, 2794 West US Highway 80 Garden City, GA 31408. (912)964-2862. www.bakermccullough.com

Betty Catherine Anderson VanWechel (Cathie), 74 of Garden City, GA went to be with our Lord and Savior on Saturday, January 23, 2021. Cathie was born on May 21, 1946 in Savannah, GA. She married Stephen A. VanWechel of Seattle, WA on August... View Obituary & Service Information

The family of Cathie Van Wechel created this Life Tributes page to make it easy to share your memories.