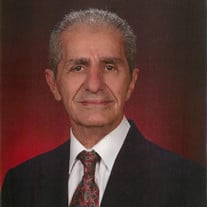 Basil James “Bill” Mamais, 90 years old, died Wednesday, March 24th, 2021, after an extended illness. Bill was born on March 20th, 1931, in Athens, Greece, and was the son of Iakovos and Anastasia Baltasis Mamais. Following graduation from high school in Athens, Greece, Bill joined the Greek Merchant Marine. He then returned to Athens and completed his military service in the Greek Navy and then graduated from the Greek Naval Academy as an officer. Bill went on to become a Captain in the Greek Merchant Marine. Bill travelled to countless ports across the world with the Merchant Marines. While he was in port in Savannah, he met his future wife, Cynthia Davis. They were married on April 23rd, 1963 and settled in Savannah, Georgia. Bill worked for many years in the shipping industry in Savannah and retired as Vice President of Smith and Kelly in 1989. In addition to Bill’s parents, he is predeceased by his sister Eleni and brother Spryos Mamais. In addition to his wife of 58 years, he is survived by his son, James Basil ‘’Jack” Mamais, his daughter, Anastasia Mamais “Tasia” Phillips and her husband Larry, their children James and Christina Rymer and Elliott and Lindsey Phillips, and Bill’s youngest son, John Davis Mamais and his wife Emilie Sciortino, and their children Sydonie and Max. He is also survived by his sister, Christina Kyriazidou in Kallithea, Greece, along with several nieces and nephews in both Athens, Greece and Savannah, Georgia. Bill was proud of his Greek heritage and represented his pride by serving on AHEPA at St. Paul’s Greek Orthodox Church. He also served on the Board of Directors of the International Seamen's House. He enjoyed attending Sunday services and working in the annual Savannah Greek Festival, where he worked at the wine bar. He was the sweetest Papou and the best Greek dancer. He loved spending time with his children and grandchildren and his love was felt by all who met him. The funeral service will be held at St. Paul’s Greek Orthodox Church, located at 14 West Anderson St., Savannah, Georgia, 31401, on Monday March 29th at 10 am. In remembrance of Bill and in lieu of flowers, please consider sending donations to St. Paul's Greek Orthodox Church in Savannah, Georgia or to the Savannah International Seamen’s House. The Savannah International Seamen’s House is located at 25 Houston Street, Savannah Ga, 31401.

The family of Basil James "Bill" Mamais created this Life Tributes page to make it easy to share your memories.

Send flowers to the Mamais family.