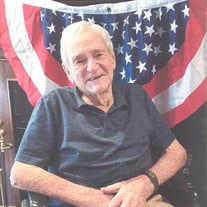 Arthur Robert Owen (MSG, US Army Ret.) , 87, passed away peacefully on March 1, 2022 at Hospice of Savannah surrounded by his loving family. Born April 18, 1934 to the late John and Irene (Slaughter) Coburn. The youngest of eight children, Arthur was raised by his late sister, Lucille Coburn and her husband Hershel Owen. Arthur graduated from Old Main High School in North Little Rock, AK. Upon graduation, he joined the US Army National Guard of Arkansas in 1951. In 1957 he became an active member of the Army National Guard of the United States. During that same year, Arthur was a member of the National Guard unit that was called up to preserve the peace and safety of the Little Rock Nine during desegregation. In 1958, Arthur enlisted in the U.S. Army, where he proudly served his country, including a tour in Vietnam, until his retirement in April of 1983. In 1965, Arthur married the love of his life, the late Sandra Watts Owen. Arthur and Sandra were happily married for fifty years until her death in 2015. After retirement from active duty, he continued to work as a civilian employee at HAAF Transportation motor pool for nineteen years and then continued to work full time until he was seventy seven years old. Arthur was a long time member of St. Luke UMC and enjoyed hunting, fishing, working on cars, and cutting down trees. He had an extremely generous and giving heart. Survivors include his daughters, Rebecca (Keith) of Greenville, SC, Allison (David) of Rincon, GA, Cindy Dominoguez (Bill) of Bigelow, AR, Annette of North Little Rock, AR; and son, David of North Little Rock, AR.; grandchildren, Courtney (Ben) of Pelzer, SC, Zachary of Greenville, SC, Joshua of Charleston, SC, Samantha of Rincon, GA, Owen of Rincon, GA, and Davey (Tanya) of Tipton, IN; and one great grandson, Cohen of Pelzer, SC. He is preceded in death by his parents, his loving wife, brothers, Marion, Jack, Jim, and Clifton Coburn, and Forrest Owen; sisters, Minnie Coburn, Lucille Humphery and Gathlou Arrington. In lieu of flowers, memorial contributions may be made in Arthur’s honor to St. Luke UMC, 9114 Whitefield Ave. Savannah, GA 31406 or to a charity of your choice. Visitation will be held Saturday, March 5, 2022 from 11:30 a.m. until noon at St. Luke UMC. Military Honors will be held Saturday, March 5, 2022 at 1230 p.m. at Hillcrest Abbey, 1600 Wheaton Street with Rev. Eddie Morrison officiating. Baker McCullough Funeral Home Hodgson Memorial Chapel 7415 Hodgson Memorial Drive has been entrusted with arrangements.

Arthur Robert Owen (MSG, US Army Ret.) , 87, passed away peacefully on March 1, 2022 at Hospice of Savannah surrounded by his loving family. Born April 18, 1934 to the late John and Irene (Slaughter) Coburn. The youngest of eight children,... View Obituary & Service Information

The family of Arthur Robert Owen created this Life Tributes page to make it easy to share your memories.

Send flowers to the Owen family.