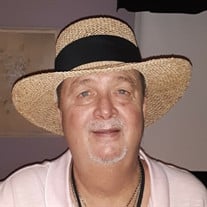 "Come unto me, all ye that labor and are heavy laden, and I will give you rest.” Arthur Durwood Hutto, age 62, left us in this world in the early morning of Monday, January 3rd , 2022 to be pain free in his heavenly home. Born at Georgia Baptist Hospital in Atlanta on Friday the 13th of November, 1959, he passed away with his wife Beth at his side after a year-long battle with various health complications. Artie’s life was rescued by Dr. Mark Murphy and the Medical University of S.C on Sept. 21, 2005 when he underwent a liver transplant. He survived for 16 years doing very well, but had serious health issues beginning in late 2020 that eventually took his life. Artie was born to the late Reba Jeanette Bennett and Rowan Durwood Hutto. The family moved to Savannah in 1971 where he attended Hubert Middle School, Savannah High School, and eventually graduated from Jenkins High in 1978. Most notable was his participation in the Jenkins 1978 production of “Godspell” where he played the parts of both Judas and John the Baptist. The play, directed by Bob Fennell, was a very proud moment in Artie’s life. Jeanette was a formidable woman with fiery red hair who graduated nursing school at the age of 50. Dad was a musician in his early days, mostly known for his rockabilly style and Elvis look alike dark hair. The story goes that Durwood was in Nashville attending a DJ convention when he received news of Artie’s pending arrival. He hitchhiked all the way home to be present for his son’s arrival. Artie himself had his daddy’s melodic voice and sang as often as he could. Unfortunately, as his health deteriorated, he lost his voice and his precious dark hair including his beloved pony tail as he wore it later in life. In his youth, Artie was a decent basketball player and enjoyed playing on the neighborhood courts with his Eastside, Westside and BC friends. Active participation in sports was something that age and illness took from him. He transitioned from a player to a spectator with relish. For him fall football weekends were heaven on earth. In the 80’s he was a popular bartender, mainly in the Riverstreet area, and worked at the Exchange Tavern with “mean” Jean, Mr. Ed and others. He later worked as a liquor, beer and wine salesman. His last jobs were in miscellaneous retail sales, mostly furniture. Always the constant and persistent salesman, his last great “deal” was in procuring his wife Beth her chosen perfect brand, new automobile right before the COVID lockdown! He could be a hard and cynical man at times, but no one ever doubted that his heart was in the right place. His one true rule was that he could not tolerate liars and forgiving that was always hard for him. But illness has a way of humbling people and God never let up on Artie in that respect. Artie fought for life many times over though, never doubting that whatever happened, God loved him! Being very sick in 2005 prior to his transplant, Artie and Beth were married at Candler Hospital in March of 2005 just prior to being transferred to MUSC for pre-transplant testing and qualification. Beth retired in July of this year to care for Artie. Preceding him in death were his parents, his Uncle Jim and Aunt Margie Brown, Aunt Helen Savanich, maternal grandparents Lucille and Thomas Bennett, and paternal grandparents Helen and Cosie Hutto. Additionally, he was predeceased by his good friend Billy Holt and his beloved fur babies, too many to name, but especially Blueboy the cat, and Rio and Josie his beloved white shepherds. Survivors include his wife, Beth Warren Hutto (nee Smith), and her sons Travis and Adam Warren, brother Michael and Elaine Hutto, niece Samantha Hutto and nephew Alan Hutto as well as numerous cousins. Also, friends Tony Alphonso, Michael McNamara, Pam Brown, John Mell, his Tavern friends, Tommy, Buddy and many others. He also leaves behind his four-legged children Beau and Shiloh his german shepherds and his cats Koko, Callie, Zoey, Bluebelle, Oscar, Willie and newest addition, solid black cat Merlin (after all every King Arthur needs a Merlin)! Thank you to all the Candler Hospital staff and friends who have supported him over the years and to the kind, wonderful staff at Hospice Savannah. In addition, special thanks go to Dr. Mark Murphy and his associates for all your care. A Visitation will be held 5:00 – 7:00 p.m., Thursday, January 6, 2022 at Baker McCullough Funeral Home, Hodgson Memorial Drive, Savannah, GA 31406. The Funeral Service will be held at 12:00 noon, Friday, January 7, 2022 at Baker McCullough Funeral Home, Hodgson Memorial Drive, Savannah, GA 31406. Burial will follow the service at Greenwich Cemetery. Please consider donating in Artie's name to the St. Joseph/Candler Foundation, 5354 Reynolds St, Savannah, GA 31405. https://www.sjchs.org/foundations/donate/make-a-gift-now

"Come unto me, all ye that labor and are heavy laden, and I will give you rest.&#8221; Arthur Durwood Hutto, age 62, left us in this world in the early morning of Monday, January 3rd , 2022 to be pain free in his heavenly home. Born at Georgia... View Obituary & Service Information

The family of Arthur Durwood Hutto created this Life Tributes page to make it easy to share your memories.

&quot;Come unto me, all ye that labor and are heavy laden, and I will...

Send flowers to the Hutto family.