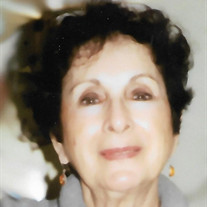 Anastasia Mimikou Miltiades, 96, died Saturday, October 16 at Spanish Oaks Retreat. She was born October 2, 1925 to Zachary and Eleni Koka Mimikou. She was lovingly known as “YiaYia.” She lived in Greece during WWII and she fled with her family to avoid aerial bombing. She lived in Greece while it was occupied by the Nazis and she was a witness to the realities of WWII. She was a survivor. She came to America as a war bride of Michael Russo in 1947. Following the death of her first husband, she married Arthur Victor Miltiades in 1949. They made their home in Savannah. She was active in the St. Paul’s Greek Orthodox Church, Philoptohos Society, Maids of Athena and Daughters of Penelope. She volunteered for the Night in Old Savannah and the Savannah Greek Festival for many years. She was well known for her Greek cooking skills and was always available for the needs of others. Her greatest achievement was the love she bestowed on her grandchildren, which were the center of her life. She was a generous lady who will be missed by many but especially by her grandchildren. She is survived by her children, Evelyn Russo Miltiades Forman (Ed), Helen Arthur Miltiades, John Arthur Miltiades (Joann), Chris Arthur Miltiades (Shari) and James “Butch” Edward Miltiades; Her grandchildren Ami G. Zipperer (Corbin), Michael Forman, Andrew Forman (Dalvis), Adam Miltiades (Sara), Brian Miltiades, Victor Chris Miltiades, Mary Christine Miltiades, Jay Miltiades (Heather), William “Bill” Arthur Miltiades & Mary “Marta” Miltiades (Sean Clayton) and her great grandchildren Branden Zipperer, Connor Forman (Jaira), Charles Zipperer, Theodore Miltiades, Hanna Miltiades, Starlyn Street and Amelia Miltiades. She is also survived by her sisters Despina Spanou and Katina Mimikou of Piraeus, Greece. In addition to her first husband, she was predeceased by her husband Arthur Victor Miltiades, son William Arthur Miltiades and brother John Mimikou. Visitation will be from 5:00 – 7:00 p.m., Tuesday, October 19, 2021 at Baker McCullough Funeral Home, Hubert C. Baker Chapel, 7415 Hodgson Memorial Drive, Savannah, GA 31406. A Trisagion service will be held at 6:30 p.m. A funeral service will be held at 11:00 a.m., Wednesday, October 20, 2021 at St. Paul’s Greek Orthodox Church, 14 W. Anderson Street, Savannah, GA 31401. Burial will follow at Bonaventure Cemetery. Remembrances to St. Paul’s Greek Orthodox Church, Savannah, Georgia.

Anastasia Mimikou Miltiades, 96, died Saturday, October 16 at Spanish Oaks Retreat. She was born October 2, 1925 to Zachary and Eleni Koka Mimikou. She was lovingly known as &#8220;YiaYia.&#8221; She lived in Greece during WWII and she fled... View Obituary & Service Information

The family of Anastasia Mimikou Miltiades created this Life Tributes page to make it easy to share your memories.

Send flowers to the Miltiades family.