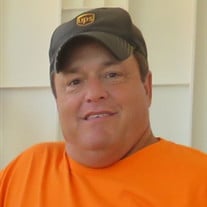 Albert “Albee” D. Clark, (60) died on September 17, 2021 at Memorial Hospital, Savannah, GA. Albee was born in Savannah, GA to Paul Clark, Sr. and Melva Clark. In addition to his parents, he was predeceased by his brother, William Ronald Clark. Albee grew up on Tybee Island and Whitemarsh Island. He was a member of Victor B. Jenkins Boys Club of America, a long-time volunteer and supporter of Oatland Island Wildlife Center. In 1980, he joined his dad on the F/V Kathy Dean as a crew until 1993, when his father retired and he became its Captain. He kept the boat until 2001, when he dropped his anchor and became a pre-loader, then shifter at UPS. He celebrated 20 years with UPS in July. Albee is survived by his loving wife of 36 years, Darlene D. Clark; sister, Velma Walker (John); brothers, Paul Clark, Jr. (Lori), Adam Clark (Kristine); and brother-in-law, Charles Donaldson (Melissa). Nephews and nieces include Michael Dorsey, Jason Dorsey, Joshua Clark, Cody Clark, Haley Clark, and Madison Donaldson; and in-laws, Dock B Donaldson (Cheryl) and Sandra Parrott (William). The family will receive friends at Baker McCullough Funeral Home, Hodgson Memorial Drive, Savannah, GA on Thursday, September 23rd from 6pm – 8pm. A celebration of Albee’s life will be at his church home at First Baptist Church of the Islands on Johnny Mercer Blvd, Wilmington Island on Friday, September 24th at 11am. We welcome those who would like to share their memories, photos and stories of his life to join us and speak at that time. Burial will immediately follow at Greenwich Cemetery. We expect to be following CDC guidelines, we do ask that guests wear masks during close-contact and in buildings if possible. In lieu of flowers, remembrances may be made to Oatland Island Wildlife Center through FOO (Friends of Oatland) through special link for Albert Clark (https://www.friendsofoatland.org/support); St Jude’s Children Hospital (https://www.stjude.org/donate/donate-to-st-jude.html?sc_icid=header-btn-donate-now); Old Savannah City Mission (https://oldsavannahcitymission.org/index.php/campaigns/donate/); or First Baptist Church Islands (https://pushpay.com/g/fbcislands).

Albert &#8220;Albee&#8221; D. Clark, (60) died on September 17, 2021 at Memorial Hospital, Savannah, GA. Albee was born in Savannah, GA to Paul Clark, Sr. and Melva Clark. In addition to his parents, he was predeceased by his brother, William... View Obituary & Service Information

The family of Albert "Albee" D. Clark created this Life Tributes page to make it easy to share your memories.